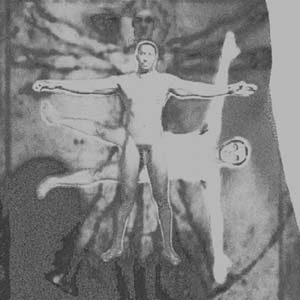 Using various digital media, Toronto artists Andy Fabo and the late Michael Balser have created a new exhibition which pits the dream of the idealized male body against the reality of human mortality. The exhibition includes a DVD projection work, … of imperfect proportions…, eight digital prints and an interactive CD-ROM entitled The Game of Art which takes a satirical look at the gap between the romantic and the actuality of being an artist. Imperfect Proportions is created from fragments culled from a vast archive of images created and gathered by both the artists in their solo and collaborative projects. This gives the work autobiographical underpinnings that enhance the often sublimated themes of memory, loss and desire. With the death of Michael Balser during the production of this work, these elements have become more emphatic in the viewers’ reading of Imperfect Proportions.

Michael Balser (1952-2002) was an artist, writer, curator and teacher working in digital media. He is known for his work in video that ranges from experimental narrative to documentary and through his collaborations with artists and community groups. Balser was a co-founder of SAW Video in Ottawa in the early eighties and a board member of Trinity Square Video from 1985 to 1991. He also published articles about new media in FUSE, POV, Lola, Metro and on the World Wide Web. In 2000 Balser co-produced Convergence with Andy Fabo and Flashback with Ed Sinclair. In 2001 he completed Rocket Science for the LoFi Sci-Fi program at the Images Festival in Toronto. Balser and Fabo showed their first DVD project, THE MOTION OF LIGHT IN WATER in autumn of 2001 at the Sir Wilfred Grenfell Gallery at Memorial University, Cornerbrook, Newfoundland. There will be a retrospective of twenty years of Michael Balser’s video as part of the 2003 Inside/Out Festival in Toronto, which will include Popular Science, the last tape completed weeks before his AIDS related death.

Andy Fabo is an artist, writer, curator and teacher with a history of exhibition and production in painting, drawing, video, and intermedia art. He was a founding member of Toronto’s Chromazone collective of painters and was a board member of Mercer Union Gallery in the late eighties. He is currently producing digital works which compress history, memory and nostalgia. His recent solo show, TIME MACHINE, at SPIN Gallery in Toronto, consisted of 20 silkscreen paintings from digital files. He has published essays on contemporary art in Parachute, FUSE, C Magazine and in numerous catalogues. He has an upcoming survey at the Museum of Contemporary Canadian Art in Toronto.