Irit Batsry Commissaire : Valérie Lamontagne To Leave and to Take 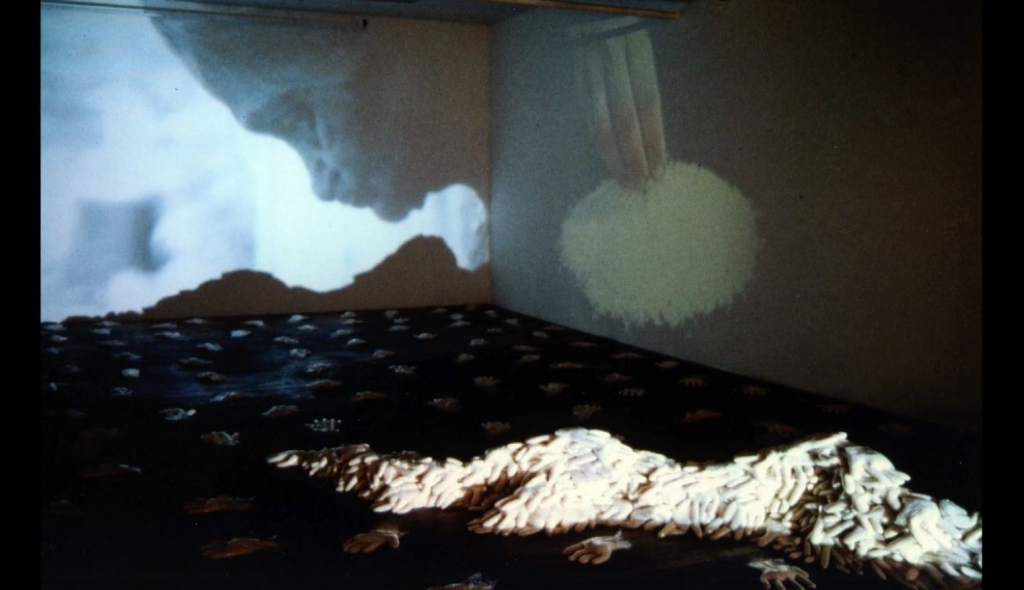 Opening on Saturday, September 13, at 4 pm

Vidéographe presents the video trilogy Passage to Utopia at the Cinémathèque Québécoise on September 16 and 25, 1997

In To Leave and to Take, Irit Batsry uses a simple basic unit: a “hand” made of rice. The rice hands (about 2000 of them, adding up to one ton of rice) are dispersed in the space as traces of an itinerary and as a “building blocks” for shelter units. The shelter units, reminiscent of sand bag barricades, can be perceived as half built or half destroyed. Video tapes, in evoking a Sisyphean endeavor, are projected in this darkened, transformed space.

To Leave and to Take thus evoke notions of food and shelter through the use of poetic objects and video projections. This installation is part of a thematic project in progress entitled, Neither There Nor Here. The project, initiated in 1995 after a short stay in the South of India, is being produced during an artist’s residency at the Academy of Media Arts, Cologne.

Irit Batsry is an internationally acclaimed, New York based artist, working mainly in video and installations since 1981. Her work has been shown in museum exhibitions, festivals and television broadcast in 30 different countries. In her video work she uses painterly images and poetic texts to question notions of perception, language, memory and identity. This is her first installation to be shown and developed in Canada. Her tapes were presented in Montréal at the Festival International du nouveau cinéma et des nouveaux médias (1987, 1988, 1996) and at the Manifestation Internationale Vidéo et Art Électronique (1995, 1997).

Valérie Lamontagne is a freelance art critic, curator and artist. Her writings have been published in C, Mix Magazine, Etc Montréal and Parachute. She co-curated The Space Between II at the Saidye Bronfman Centre (1995) and Compact Abundance at articule (1996), and presented at OBORO Hybrid Cultures: works from Mexico City and Montréal (1997). She is presently undertaking an M.F.A. in Painting at Concordia University.