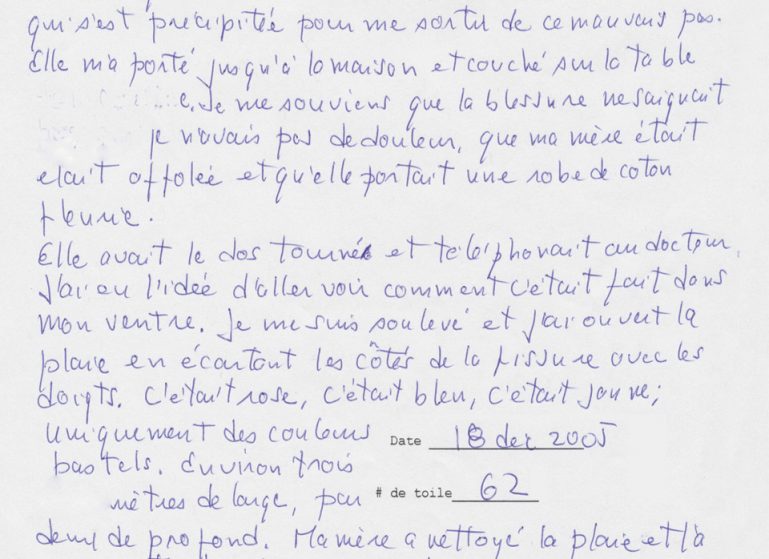 In 2005, I initiated The Scar Project, an ‘open lab’ experience where people sew, with various fibers and threads on canvas, a representation of a physical, emotional, psychological scar they may have, and write out the accompanying narrative. Over the last 8 years canvases and texts have been created in workshops with youth groups, cultural centres, seniors centres, prison circles, missions and schools, and subsequently exhibited in galleries and museums in Canada, the United States, and most recently, Australia, as part of the 18th Biennale of Sydney. The Scar Project is a vehicle for people to anonymously share their personal traumas with others, creating a space that is simultaneously contemplative and transformative. It is a study in symbology as well as an emotional census of how we describe our wounds, both literal and metaphorical. With over 1400 canvases and texts collected, I begin the task of cataloguing and creating the Scar Project, Archive.

My project with OBORO is to create an immersive multimedia installation based on stories culled from the Scar Project, Archive. The piece consists of 100 audio recordings each associated to specific projected video capsules or series of still images. Using sensors, location software, and MAX/MSP Jitter programming, viewers will trigger the media by walking through the space. According to the point-of-view of the narrative, each story will be spatially mapped into quadrants (life, death, spirit, body), which will act as a metaphorical compass guiding the viewer through the work. This new piece will be presented in the fall of 2014.

Nadia Myre is a visual artist from Montreal (Quebec) whose multi-disciplinary practice is inspired by participant involvement as well as recurring themes of identity, language, longing and loss. She is a graduate from Concordia University (M.F.A., 2002) and a recipient of Les Elles de l’art (2011), CALQ’s Prix à la création artistique pour la région des Laurentides (2009), and an Eiteljorg Fellowship (2003).