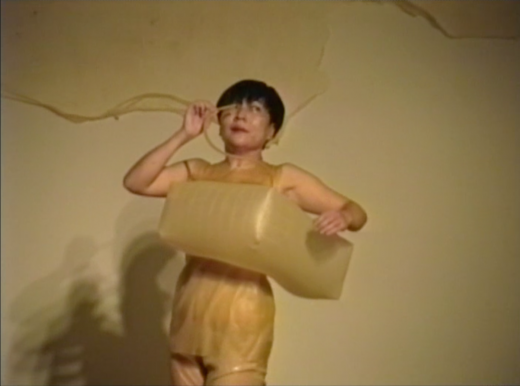 Solo pieces by Haruo Higuma (Gorin No Sho) and Tari Ito (The Memory of the Epidermis). Canadian tour organized by Hank Bull and Zainub Verjee.

Performance Art from Japan is a nine-city Canadian tour organized by the Western Front for two artists, exponents of the latest developments in Japanese performance art. Haruo Higuma and Tari Ito represent different approaches and will each present a solo piece. As organizers of the Hinomata Festival they are also interested in collaborations with Canadian artists and in discussing similarities and differences between Japanese and Canadian performance. This year’s Hinomata Festival featured over 60 artists, including Vancouver’s Elizabeth Fischer and Randy Anderson.

Mr. Higuma has been showing videotapes and producing installations since 1972. Practiced in the use of new technologies, in particular computer graphics, he performs in an installation ambience using video monitors and various projections. After this tour, he will take up a one-year residency in New York, thanks to a grant from the Nihongo Bunkicho (Japan Culture Agency).

“Gorin means ring of 5, a basic structure of oriental thought. Gorin exists in our life in the 5 worlds of sky, wind, air, water, and earth, 5 images in the relation of a ring. I believe that Gorin has an element of talking between people…I want to extend the base of culture and make new encounters, extending each relation in performance.”

Ms Ito’s movement-based performance imbues everyday objects with a sense of mystery and transforms simple actions into ritual. She has worked in collaboration with some of Japan’s top improvising musicians and image-makers, and is an active organizer on the Japanese performance scene. Between 1982 and 1986 she lived and worked in Amsterdam, working there with flutist Wil Offermans.

“Trembling my body consciously is the starting point I follow. I look for motive power in my body, on the floor and the ground, this vibration reaches the skin–innumerable cell membranes are already trembling. But it is a pity that I can not feel the movement of the cells. The only thing I can know is that if the vibration does not travel well, I feel uncomfortable. It it does, the possibilities are magnified. I can depend on my body for the sense of the body itself. And then, if this movement is transmitted to the skin-sense of the people watching, the methodology is in fact and effective form of expression.”