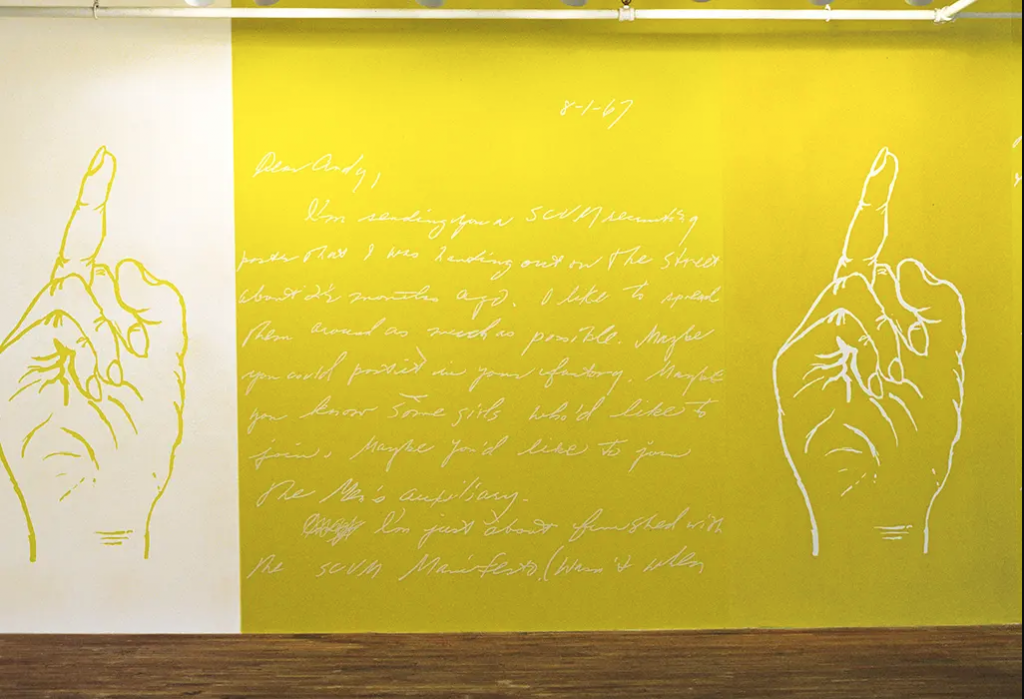 Using sources from the sixteenth century to the present, Dearest examines some of the ironies, fantaisies, delusions and romantic illusions that surround the representation, sometimes the self-representation, of women. The exhibition includes a number of large-scale works that the artist has created directly on the walls of the gallery during a residency at OBORO. In these, Amantea has used flock – a material commonly associated with bad taste, certain ethnic groups and social classes – to produce richly textured surfaces that underscore and draw out the pathologies and paradoxes of her source images and texts. In contrast to the scale of these works, the exhibition also features an installation in which three video loops are seen in continuous projection in a series of thirty-one water globes. Utilizing film clips and figurines, the installation plays upon the intimacy of the miniature in scrutinizing the unreal, dreamlike, yet often moving sentimentality that characterizes women in popular representation.

“Gisele Amantea’s allusions to the paradigms of photography and film, to narrativity and mass culture, her use of decorative techniques and details, appropriated texts, cursive script and, recently, video, differentiate her work from what has been called high art. Although the subject matter, her choice of materials, the form of her work and its aesthetics are familiar, they are not traditionally valued: these matter and materials are usually associated with the feminine or the domestic, with minor art or craft forms, with kitsch or alternative cultural practices, rather than with the masculinist projects of high art and the avant-garde.” – Annette Hurtig (Requiescat, Calgary; The Stride Gallery, 1996)

Originally from Calagary, Gisele Amantea lives in Montréal where she teaches at Concordia University. Earlier this year Dead Letters, an exhibition of text-based works on fabric, was presented at YYZ in Toronto. A ten-year survey of her work organized by the Centre d’Art Contemporain de Basse-Normandie, opens in January 1999, in Hérouville, France.