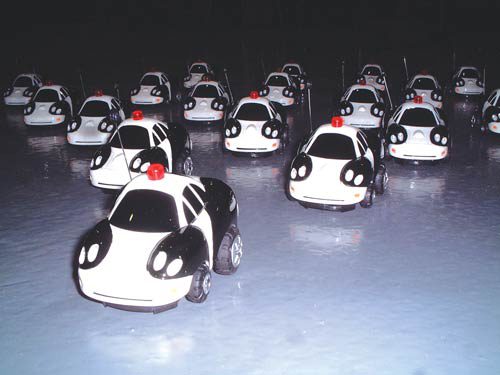 Deconstructing Networks by Jonah Brucker-Cohen is an exhibition of projects that critically examines and questions the proliferation of networked media in both physical and online instantiations. Projects in the exhibition include: “Alerting Infrastructure!,” a website hit counter that destroys a building; PoliceState, a fleet of radio-controlled police cars whose movements are dictated by “suspicious” keywords scanned on a local network; Wifi-Hog, a tactical tool to liberate public wireless nodes; SpeakerPhone, a sequence of individually addressable speakers that expose the hidden pathways of data networks; Crank The Web, a browser that allows the user to physically “crank” their bandwidth to download a website; and IPO Madness, a slot machine that generates domain names in the quest for an eventual IPO. The exhibition will also feature a one-night performance of SimpleTEXT, an audio-visual project that is controlled by audience members texting messages from their cellphones and a workshop entitled MIDI Scrapyard Challenge which will be held by the artist and collaborator Katherine Moriwaki, where participants can create digital instruments from discarded or cast off materials.

Jonah Brucker-Cohen is a researcher, artist, Ph.D. candidate, and HEA MMRP fellow in the Disruptive Design Team of the Networking and Telecommunications Research Group (NTRG), Trinity College, Dublin. He was also a Research Fellow in at Media Lab Europe and received a Masters from the Interactive Telecommunications Program at NYU. His writing has appeared in international publications such as WIRED, GIZMODO, Rhizome.org, and his work has been shown at events and locations such as Transmediale (Berlin), ICA (London), Whitney Museum of American Art’s ArtPort, Ars Electronica, ZKM and others.