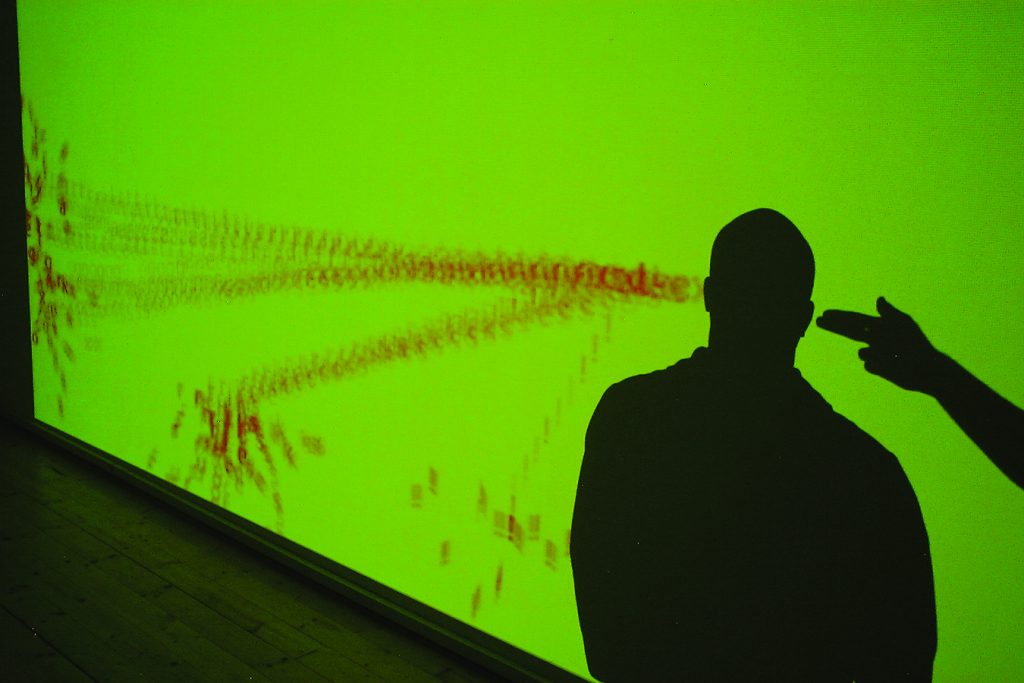 Everything You Thought We’d Forgotten by Jason E. Lewis collects together a series of text-based interactive works that explore the borderlands between conflicting cultural identities, memory and history, and the visual and the textual. Common to all these works is a formal concern with how kinetics and interactivity can be used to expand how digital texts can be written, read and performed. The exhibition includes What They Speak When They Speak to Me, an interactive poem about mistaken identity that is read by tracing a fingertip through a mass of writhing letters; I Know What You’re Thinking, a program that reminds you of forgotten conversations by dredging your hard drive for the textual flotsam found in emails, instant messages and documents; Nine, a dynamic poem examining lives that could have been—but were not—lived; TextOrgan, a series of poems read by spraying them on the wall like grafitti; Intralocutor, an interactive installation about the connection between what you say and how you say it; and the mobile messaging work Cityspeak, which enables mobile device users to “talk back” to large-scale public displays.

Jason E. Lewis is a poet, digital media artist and software designer. His practice revolves around experiments in visual language, text and typography, with a core interest in how the deep structure of digital media can be used to create innovative forms of expression. His creative work has been featured at the Ars Electronica Centre, ISEA, SIGGRAPH, Urban Screens and Mobilefest, among other venues, and his writing about new media has been presented at conferences, festivals and exhibitions in Berlin, São Paulo, London, Thessaloniki and Los Angeles. The work in this show has been supported by Obx Labs, Hexagram, the Fonds québecois de la recherche sur la société et la culture (FQRSC), Canadian Heritage, Arts Alliance, the Canada Council for the Arts and the English Arts Council.