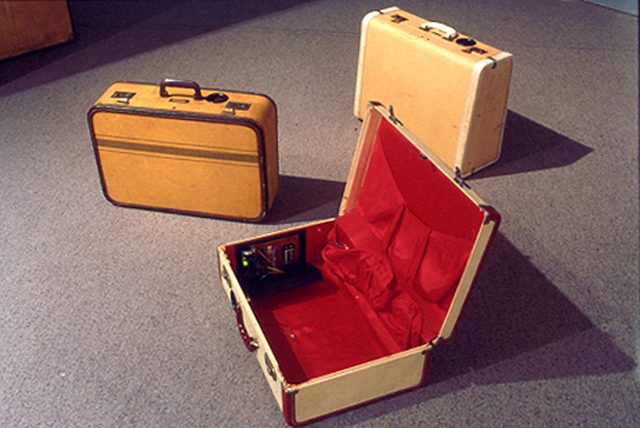 In collaboration with Nicholas Stedman

Vernissage on Saturday, April 3, at 5 pm

Little Breeze is an interactive installation by Toronto artist Nina Levitt, in collaboration with artist Nicholas Stedman. A complex piece that examines the ephemeral presence of women spies during World War II, the installation features vintage suitcases embedded with audio speakers and electronics, and a large video projection cont-rolled by a computer running interactive software. Viewers are encouraged to become active par-ticipants in the gathering of (audio) information and the decoding of (video) images. Using the suitcases also temporarily transports users into an experience of migration and dislocation.

The installation reveals the experiences of women whose contributions to the war effort might seem ordinary or inconsequential, rather than the notorious female agents like Mata Hari or the fictional “James Bond” femme fatales. The work centres on one such spy, British agent Violette Szabo, code named “Louise” who at the age of 23 was sent into Occupied France for two missions, and was captured and executed just a few months before the end of the war.

Little Breeze was first produced in 2001 for the exhibition Finding Camp X: Contemporary Considerations of an Enigma at the Robert McLaughlin Gallery, Oshawa. Produced with funding from the Faculty of Communication & Design at Ryerson University, the Ontario Arts Council, the Toronto Arts Council and a co-production of the Banff Centre.

Nina Levitt is an artist working in photography, video and new media. Her work has shown across Canada, in the US and the UK, and has been widely published and reviewed. Recent shows include The Uncanny: Experiments in Cyborg Culture (Vancouver Art Gallery 2001-03), Finding Camp X:

Contemporary Considerations of an Enigma (Robert McLaughlin Gallery, Oshawa, 2002), The Young & The Restless (A Space, 2001) and Pool (Harbourfront Art Gallery, 2001).