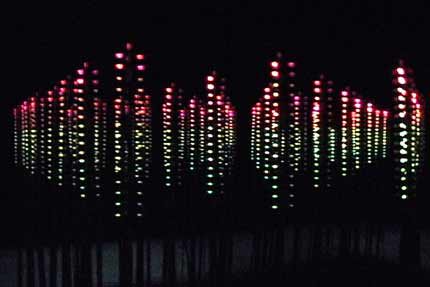 Vernissage on Saturday, November 13, at 5 pm

Pod (2003) is the first installation created for the Wind Array Cascade Machine (WACM) system. It is a 64-channel installation that uses 2,880 light emitting diodes (LEDs) to portray a real-time 4 dimensional picture of the wind, where each of 64 “pods” functions as an amplitude meter of the 64 wind sensors of the WACM data network. Pod comes to OBORO directly after its European premiere at the Museum of Contemporary Art Kiasma in Helsinki, Finland, for ISEA 2004.

Wind Array Cascade Machine, 2003 is a telematic 64-channel environmental mapping and network diffusion system. Using the wind that blows across an open field or rooftop, WACM’s 64 motion sensors track the amplitude (velocity) and wave movement of the wind in real time. Direction and wave movement of the wind is captured in the network data set. The captured wave patterns metaphorically represent the sound (sine) wave. The WACM data is both recorded to hard disc, and is streamed over the WWW, for use in Heimbecker installations requiring the WACM data set. Since August 2004, WACM has been located on the rooftop of the Ex-Centris building in Montréal.