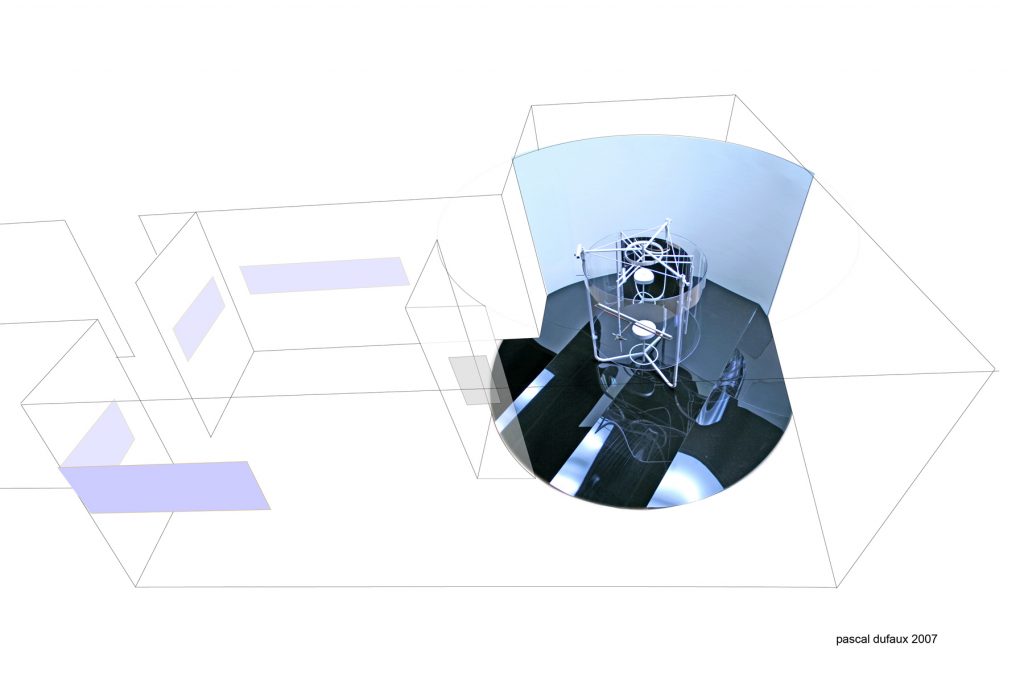 It begins with an observation, repeated. At night I walk along a canal. On the other bank, there are emissions of lights. On the surface of the black water, I see their reflections stretching. As I move, I perceive that no matter where I am on the bank, the light radiation on the water follows me.

From there, I become aware that a radiation unites my glance to the visual deployment of the reflections and the reality all around. The image that I perceive is an instant of this radiation. There would be as many radiating realities as there are points of view, as many images. This radiation would project the image along a vector of depth which would go from there to here.

Then comes to me the idea that at the two ends of this line of distance, fleeing from infinity to proximity, would be the two poles of my representation of the world: the image of a landscape and the image of a face. Thus the panoramic image of a landscape would represent this kinetic instant where I pivot on myself the glance pointing the periphery, and the panoptic portrait this other kinetic instant where I turn around my subject the glance pointing its center.

Centripetal or centrifugal, it seems to me that every image is a beam sweeping the space, whose intimacy of the glance would be the origin.

Capture of the 360° radiation of the visual substance of the human body.

12 images selected from the cataloguing of panoptic portraits of 88 people made for Atlas, an audio and video project in collaboration with the composer Christian Calon. Atlas is produced with the help of a grant from the Canada Council for the Arts.

Studies in scenography and visual arts (Concordia University 1986-90). In the 90’s, undertook various designs of sound scenographic devices for musicians and composers: L’Espace Shruthi (1995), L’Orchestre-vélo (1992), L’Ensemble Karel (1994). Artist residency at the Christoph-Merian Stiftung (Basel, Switzerland, 1997) and at the Finnish Artists’ Association (Helsinki, Finland, 1998). Since 2001, elaborates a hybrid installation work between 2D and 3D: the Plethora Project at the Musée du vieux Palais (St Jérome 2002), Des mesures dévastés at the Maison de la culture Mt-Royal (montréal 2003), phénomènes / formes intermédiaire at Espacios de arte (Guanajuato, Mexico – 2003), Substance verte > ce qui se tient sous le vert at Action Art Actuel (St.Jean-sur-Richelieu 2004). In 2005, Substance verte, a mono-tape video realized at the New Media Laboratory of Oboro, in Montreal. Since 2005, privileges a joint practice of plastic artist and scenographer, conceives among others the scenography of the opera Alternate Visions produced by the company Chants Libres in 2007. Exhibits Autour de vous as well as Alzheimer during the 2007-2008 season at the Centre VU in Quebec City and at the Joyce Yahouda Gallery in Montreal.