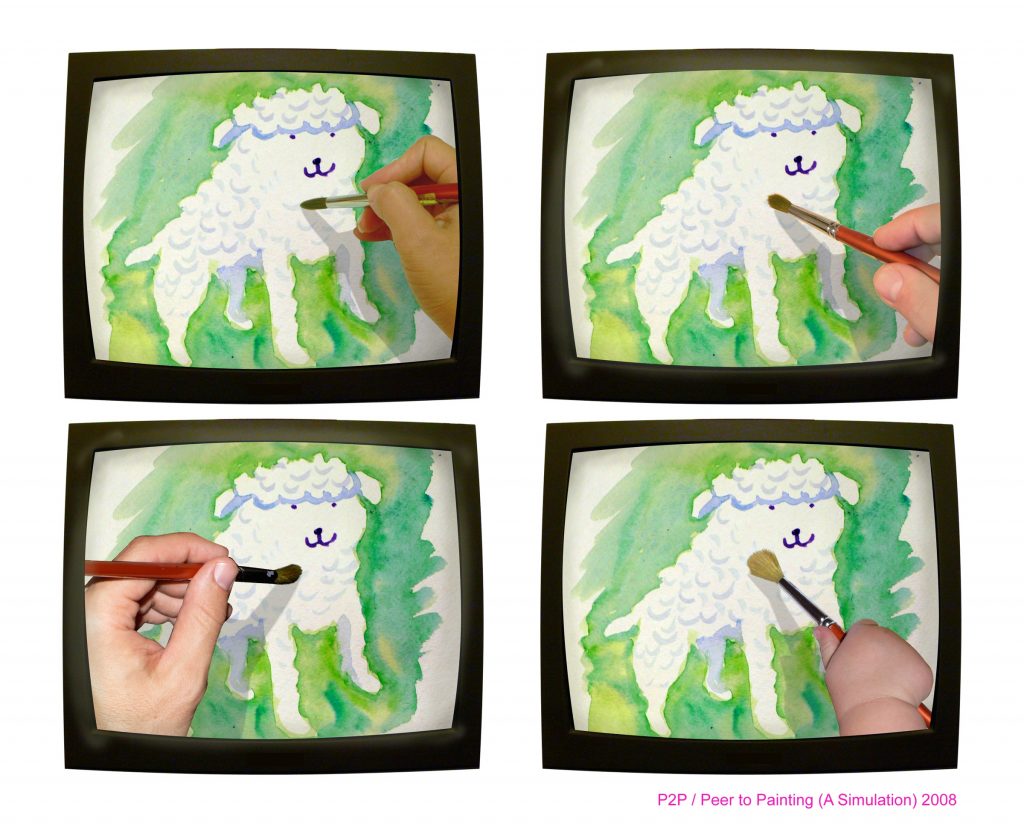 P2P / Peer to Painting (A Simulation) is a site-specific performance about simultaneously producing identical paintings in multiple locations. P2P will examine the social network as a means of creating paintings using network architecture as a method for collaborative art production.

The performance takes place in OBORO’s New Media Lab. There will be 3 painters and myself. Each of us will be set up in a work station separated by dividers to prevent us from being able to see each other. The arrangement of the work stations simulates the idea that the painters are in diverse locations around the world.

Each work station will be equipped with painting tools, three monitors, and a camera. Watching a live video feed of myself painting, the collaborators will be expected to make an exact reproduction of my painting. Each painter, in turn, will have a camera that records them painting. The video from that recording is fed to the other painters’ monitors based on 1 of 3 predefined network architectures.

The performance will be documented and edited into a video as a final product. A portion of each collaborator’s performance will take place in front of a green screen. This will later be superimposed over foreign scenery and then slotted into the rest of the performance footage, creating illusions that these collaborators are located in different countries.

The act of “Painting” itself is usually considered an individual endeavour, and importance is placed on its authenticity. In P2P, theoretically all the paintings should look the same. Each collaborator functions as a node to store in-coming data and, at the same time, shares this data with others with an intention of creating the same show at the same time in multiple locations. It requires no travelling and creates a simultaneous experience. [S.K.]

Shié Kasai is a visual artist working in sculpture, installation, and animation. Originally from Sapporo, Japan, she has been living in Montreal since 1998. She has presented solo exhibitions at the MAI (Montreal, 2008), Articule (Montreal, 2006), and Gallery 101 (Ottawa 2004), and been featured in group exhibitions in Japan, the Netherlands, and Canada. Recipient of the 2008 New Media Production Grant for Young Artists sponsored by the Caisse Populaire Desjardins du Mont-Royal.